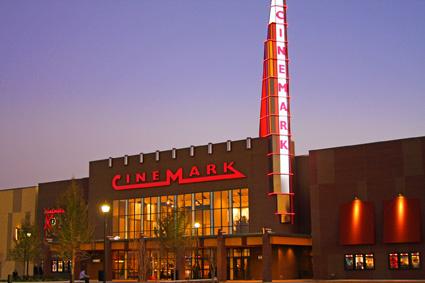 According to industry statistics, about 80 percent of movie-goers eat out before or after watching their film of choice. If the numbers stay true in Frisco, businesses around Frisco Square, where the new, all-digital Cinemark Theatre opened last week, should see a satisfying swell in customers.

“As the name indicates, it’s the next generation in movie theatre construction and design,” James Meredith, vice president of marketing and communications said. “It has the newest technology, cutting-edge amenities and all the customer-preferred options all within one building and under one roof.”

In each of the twelve stadium-style seating auditoriums, patrons can feast their eyes on wall-to-wall screens and are enveloped in digital surround sound from high quality speakers. The screens use 100 percent digital projection, and half are RealD 3-D capable.

This theatre can also boast one of only three auditoriums in the Dallas area with Cinemark XD Extreme Digital Cinema technology. The largest XD auditorium shows 2-D and 3-D pictures on a wall-to-wall and ceiling-to-floor screen enhanced with a custom JBL sound system.

Cinemark has brought in a Doremi server and a Barco DLP digital projector, so visitors can enjoy sharp digital images in plush seating, according to a release. Love seat rocker chairs provide comfort and closeness, if preferred, as the arms on the chairs can be lifted up and out of the way.

“The customers also love the self-serve concession stand, because it gives them more options,” Meredith said.

Customers can prepare their drinks, speed through concessions and on to the check out stand, so they do not miss their movie. Cinemark has an agreement with the local business Love Peace Popcorn, also in Frisco Square, to sell their specialty popcorn alongside the Cinemark popcorn.

Leslie, who saw “The Fighter” starring Mark Wahlberg and Christian Bale for opening weekend, said there is a noticeable difference in the sound quality and digital projection technology. ‘Tron: Legacy’ was the most popular movie over the weekend.

“The experience as a moviegoer is just spectacular,” Leslie said.

Construction on the theatre began in January this year, and Cinemark planned several activities for the opening week. The first 100 customers received Cinemark goody bags and radio stations helped promote the opening with ticket giveaways.

On Dec. 18, actor Ty Treadway from “Days of Our Lives” made an appearance to promote food and clothing donations to Frisco Family Services. An earlier event was designed to benefit Big Brothers Big Sisters.

“We’re very interested in giving back, and this is way that we can do that,” Meredith said.

The Cinemark Frisco Square theatre is at 5655 Frisco Square Blvd. Cinemark will continue holiday promotions through the beginning of next year. Patrons can sign up for weekly e-mails that will detail new movies, show times, coupons and special offers. Advance ticket purchases can also be found at www.cinemark.com.